Why We Don’t Write

'If I waited for perfection, I would never write a word’

This piece is written to offer a different perspective for The Forge series of articles on #whywewrite. Writing doesn’t come easily to everyone and this blog examines some of the common traps that hinder our writing. In exploring the reasons why we don’t write, the intent is to offer ways to approach the problem of how to write.

When considering the reasons why we don’t write, I think there’s three voices at play:

Together, these three aspects – procrastination, perfectionism, pessimism - make a perfect trifecta which hamper our attempts to write. It feels like being stuck on one side of a wall, with good writing on the other side of it. Each time I try to breach the wall, something stops me. There’s ideas and occasional activity but not much to show for the brain power or random sentences on separate Microsoft Word documents which would struggle to reach the definition of a ‘work in progress’. 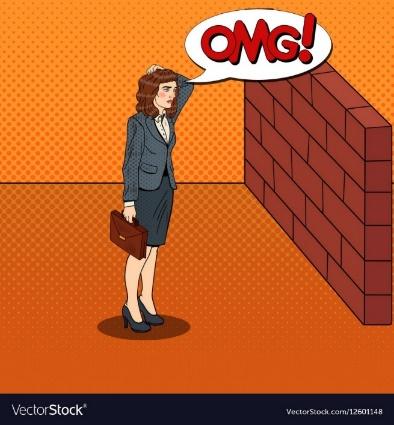 * actual picture of me thinking ‘Oh My God! [Writing]!’, wondering how to get to good writing on the other side of the wall

So let’s consider how the wall gets its strength.

Procrastination: I don’t have time

This is the most persistent reason not to write. Nearly everyone in the military is time poor, and we are programmed to find things to do if there is any down time. And there is always something that needs to be done. We are busy at work and we are busy at home (and sometimes working from home). If writing is the last task of the day after all the jobs are done, it’s hard to commit if the trade-off is sleep or Netflix. Most of us can’t dedicate hours to writing. Like exercise, it is quick to drop off the list. And if you are studying, the last thing you might feel like is more writing.

I’ve found that when writing was part of my job, such as having an essay due in the unit, I would get it done, but once that impetus was over it was hard to keep up any momentum. I’d attempt to write at night, and then clear emails instead. I’d plan to write during the weekend, then I’d prioritise family time, have nights off and promptly fall in a heap on Sunday night after getting organised for the coming week. Each day ticked away, leading to months. The longer I took the harder it was to start up again. I had ideas but lacked a conduit to create something tangible.

Perfectionism often stops us before we even start, and with some procrastination added, a robust writer’s block emerges. This is from someone who took a year (a year!) to rewrite an old essay for a blog. It’s not so much imposter syndrome, though that’s a common trap too, rather it’s more wanting to be well informed on the subject I’m writing on, which turns into ‘the more I read, the more I think I need to read’ circular approach before writing. I don’t want to have omissions in my draft which can be easily targeted, but more reading means more time, and if my argument changes I feel like I almost need to start again. Another common thought during research is that ‘someone else has already said it’. That, coupled with the belief that my writing needs a lot of time to make the grade, halts progress.

Pessimism: Nothing will come of it

Not knowing what to write is a common barrier. So is the assumption that no one will read your work, or that your ideas won’t be supported. Maybe you’ll attract the haters, draw attention to yourself or say something contentious. You might think that taking a position and writing about something controversial will land you and/or your organisation in hot water. All these possibilities are true. The spectrum ranges from ‘what’s the point; nothing will change’ to not wanting to stick one’s head above the organisational parapet, particularly at the junior level when we need the opposite - fresh ideas to improve the organisation.

How do we get over the wall?

Management of time remains the challenge, however, if we flip the idea of time as a constraint, it becomes more of an opportunity. What takes up your time and can some of it be put to writing? I find that breaks from social media win back some time. Overall, deadlines help. This article was written because I had a timeline to work to. Further I wanted to keep a commitment to the person that invited the submission. That’s not to say that I wrote it quickly – I didn’t – and there was a healthy amount of Googling done in the name of research; here’s one of the better blogs I found called why I don’t write.

Like being held to scheduled backbrief timings, having a deadline (and someone to hold you to account) is a forcing function. Even if it’s a draft for initial feedback. Declare your intentions to someone and ask them to check in with you.

It’s not going to be perfect. That’s ok. One of the most helpful quotes I’ve seen is ‘bad writing precedes good writing’. Simply getting words on paper is a good start, and the editing process can come later. In this way we get ‘progression not perfection’.

When you’ve written something, find a trusted agent who can review your work and provide honest feedback. Send it to them even if it feels uncomfortable; holding on until your work is ‘ready’ to share will take up valuable time. I saw an example recently, when someone at work shared a piece with three others. Having worked on their essay for a few weeks, it was hard to see it objectively and they were after feedback prior to submission. Everyone they asked responded quickly (why is it easier to edit other’s work than write your own?), and the published piece was better as a result. It’s certainly easier not to ask others for help, particularly if you aren’t happy with the standard at the time, however the final work may not be as good as it could be as a result. Many hands make light writing (just not too many, as different perspectives can be confusing, and all of them need time to read and consider). Here’s some useful ideas on asking for feedback – I also like this blog because it declares that ‘writing is impossible’ which sometimes rings true.

It’s normal to have varying levels of motivation towards writing. People are by turns uninterested, ambivalent, engaged, and talented. And if writing is considered as something else that ‘has to be done’, it’s going to make attempts harder. Sure, have discipline in your approach and that will likely assist outputs. But reclaiming writing as personal investment, rather than a chore, will also make the process more attractive.

To start - what interests you? What was the last problem you identified and then solved, but didn’t write it down? Confirm when your brain is sharpest and when ideas can be best captured. When do you think best – perhaps travelling to and from work, talking with others, during exercise, at night. Use this time to let your brain roam – the trick though is to write it down. Did you read something and want to write a response? Is there a military book or film worth writing a review on? If you are studying, can any of your current work be adopted for a military blog? Thinking that nothing will come of your writing can only be tested by submitting writing for consideration.

If you are beginning to write from scratch, start with reading. The Defence Library Service are professional, helpful and fast and offer a heap of digital resources and free subscriptions.  You can ask questions at any time via askalibrarian@defence.gov.au, and there are libraries on most bases for in-person enquiries.

To finish up - so what? Why should we write?

Writing is a vital part of any profession and particularly ours. Sharing reflections might help others fast track their learning, and avoid the same mistakes. Your writing might inspire someone, provoke debate, encourage the contest of ideas, or cause someone to change their mind. In our job, your writing might save lives.

Writing provides the opportunity to nail those whispers to the wall and quieten the brain for a moment. With persistence and experience, our tricky trifecta of procrastination, perfectionism, pessimism can become progress, pragmatism and positivity.

Enough of the touchy-feely stuff. There’s a sledgehammer waiting for that wall. I think Margaret Atwood would approve.

Kate Tollenaar is a lapsed occasional writer who is currently serving at Army Headquarters.

The 'Why We Write' Series